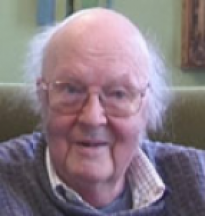 Age at interview: 78
Age at diagnosis: 76
Brief Outline: He was able to care for her in their own home until a very short time before she died. She went into residential care for a short respite and settled in well. Soon afterwards when her condition deteriorated she was found a room and moved there permanently.
Background: Carer is John Bayley husband of the late Iris Murdoch. Carer is a retired Professor. Iris was a writer.

Failure of close person to recognise the early stages of Alzheimer's disease.

Failure of close person to recognise the early stages of Alzheimer's disease.

One thing I think is important in the early stages of Alzheimer's is that I think if you are very close to the person, if you're the wife, the husband or even the mother or the father or the children, you may not notice things as quick as the outsider. I, in fact the first person who I think really saw that something rather strange and perturbing was going on was my present wife who was a great friend of Iris. We, she and her husband and Iris and I had been sort of a foursome we'd done a lot of things together and been very close.

And after the death of her husband we saw [present wife] very often and she was extremely kind and helpful. And I think she was the first person to see something was a little unusual in Iris's behaviour. I think, I think if you're the wife or the husband on these occasions you tend to take things rather for granted. Even unusual behaviour doesn't necessarily bother you, you just say oh well that's the sort of thing he does or she does sometimes.

I think quite rightly [present wife] didn't say much to me for a while but she once or twice, when we were staying with her, she did mention the fact that she wondered if we, I'd better take Iris to a doctor. I was rather surprised by this.

I mean I, and as our doctor was a busy man and was more concerned naturally with health than with the mental state of the patient, I didn't do anything until we went in 1995 to Israel to take part in one of those sort of discussions, a general kind of cultural programme. And Iris was always very good on those occasions, she loved talking to people, she loved answering questions, it was her favourite form of participation. She wasn't so keen on giving a lecture herself, she didn't have to give a lecture but she would have been excellent at discussion and question answering.

However, on this occasion she was rather, curiously tongue-tied and sometimes unable to see what the questioner was asking and to reply very coherently. I was a bit bothered about this and remembered what [present wife] had said about it not very long before.

And after the programme so to speak, which was not a success from our point of view at all and the Israeli audience got rather sort of restive, bored and a bit impatient. An Israeli author, a very nice man whom I got to know later on came up to me and said 'Is anything wrong with Iris?' And I said 'No, I don't think so, perhaps she's tired or something.' And I then said to Iris 'Do you think it went badly?' and to my surprise Iris said 'No, I thought it went rather well, rather better than usual in some ways.' So I didn't say any more to her.

But when we got back I did think we'd better see the doctor. And our doctor didn't take it very seriously but he said, and we were talking the three of us, he suddenly said to Iris, 'Iris, who is the prime minister?' A stock question as I realise later on. Iris looked rather baffled and amused too and said 'Well I don't think I know but does it matter?' And I thought this was a very good reply.

A former friend was frightened by Iris's changed appearance seeing it as a sign of 'madness'.

A former friend was frightened by Iris's changed appearance seeing it as a sign of 'madness'.

Earlier on when Iris was still in her social stage that, people who were immensely kind and, to, in any form of trouble or sort of illness, are very often terrified of madness, they, I don't mind saying this just to you. A very nice woman who lives just in this road who, would do anything for one and you know kept an eye on things when we went away and that sort of thing, was really quite unable to help at all. And I entirely sympathised and I said 'Look, don't worry, I quite understand.'

And the sight of Iris filled her with literally terror. Something in the way of the eyes, the change in the face  perhaps and I mean I think you know this is a very natural reaction. People always have been frightened of madness and you can't do too much about it, some more than others.

His wife would get up in the night and he was afraid she might wander out of the house.

His wife would get up in the night and he was afraid she might wander out of the house.

View topic summary
SHOW TEXT VERSION
EMBED CODE
PRINT TRANSCRIPT
She, developed quite quickly some rather peculiar habits like getting up quietly at two in the morning, three in the morning and wandering off downstairs and I couldn't think what was happening at first. But when I went down after her and patted her, stroked her and said 'Iris come back to bed old thing, I should think, you might be getting cold.' And then quietly with an amused smile, rather, a bit obstinate but always good natured she'd say 'No I don't think I want to.' So I thought the best thing to do was go back to bed and hope for the best.

Before going to bed I thought I'd better lock the door on the inside which I did and presently I heard her quietly, gently trying the door but I'd taken the key out. And that began to alarm me rather, considerably.

Sometimes she would escape but remarkably she never came to any harm.

Sometimes she would escape but remarkably she never came to any harm.

But in the daytime sometimes one can't, I, we may have been coming in from a walk or something of that sort and I forgot to re-lock the door and then I was doing something perhaps in the kitchen and I suddenly realised she'd gone. And she'd simply vanished away. And there were two or three times when I had to call the police and they went and search for her, the police advised me to stay at home. And in fact she always, on the first occasion I think she came back by herself rather remarkably. But later on either the police managed to find her or sometimes a friend who I warned that she could be walking around came, brought her back home.

I think that in some ways is the most alarming in my experience of the, and the most alarming stage of the dementia because it, one feels that there could so easily be a fatal accident. But in fact she had an uncanny way of avoiding trouble. She seemed to be able still to cross a crowded street and to know which way to look and that sort of thing as if this was a reflex which was very deeply embedded in the consciousness. And even Alzheimer's with its disturbance of the communications in the brain hadn't been able to eradicate.

Wonders if the desire to escape was an attempt to overcome the confusion in her mind.

Wonders if the desire to escape was an attempt to overcome the confusion in her mind.

View topic summary
SHOW TEXT VERSION
EMBED CODE
PRINT TRANSCRIPT
And Iris, poor Iris would spend very often a long time rattling the door or looking at it you know in a rather monkey like manner wondering 'How can I overcome this particular problem,' you know. And I mean the desire to escape, to get away is very touching, it was almost as if she wanted, she thought 'If I can only get out I'll get away from,' that was the only sign that she really had, that she was in, in a state of affliction about the way things were  I think normally she didn't have that but when the urge to escape came over her it was very marked.