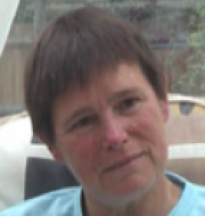 Age at interview: 52
Age at diagnosis: 46
Brief Outline: Dismissed unexpectedly from the Army where he worked on chemical defence. Unable to get a new job. Diagnosis took about 3 years. Wife worked 1 day a week, and cared for him and children. Difficult finding appropriate care. Died while in residential care.
Background: Wife with 2 young children caring for her husband who developed frontal lobe dementia while in his forties. Diagnosed in 1994. Occupation of patient: Ammunition Specialist in the Army.

Carer valued the support she got through her husband's being included in a research programme.

Carer valued the support she got through her husband's being included in a research programme.

View topic summary
SHOW TEXT VERSION
EMBED CODE
PRINT TRANSCRIPT
I was very keen to be involved in the research, for my husband to be involved in the research because of finding out what happened to him, of finding out what might have caused it and helping other people. It's, it's a strange thing and I don't think it's, I don't know how typical it is but a lot of people say I went through a dreadful time, it actually makes my life better if I think that other people can profit from my experience and don't have to make the same mistakes and fight the same battles.

And, and there was very much that feeling. And also it actually offers an awful lot of support which wasn't the reason that I wanted to be involved but was a very unexpected bonus from being involved, that you got a lot of, a lot of support, a lot of information that wasn't available outside the research project. And it's also, if you want to do well you enrol in a research project.

Was not sure if her husband was aware that he had a problem with reading and spelling.

Was not sure if her husband was aware that he had a problem with reading and spelling.

And again he couldn't understand why I thought that was bad. Because OK so we overpaid this time but they wouldn't charge us so much next time, so what. And the fact that we didn't have the money in the bank and that the cheque would bounce, he didn't care. I don't think he actually understood it. But anyway at that stage I took all over the finance.

Our children had started school. There were all sorts of silly things like [husband's name] wouldn't read the children a story and eventually whenever I sat down to read a bedtime story to the children, [he] went away. I mean if he was sitting there he would get up and go somewhere else, which I found very upsetting but in fact it was I subsequently realised that he didn't like to be reminded that he couldn't read. I mean as the children's reading skills improved, his went down hill.

Had to choose between caring for her husband and caring for their children.

Had to choose between caring for her husband and caring for their children.

And there came a point when it, when it came to a choice between [my husband] and the children, I had to choose the children. But it was never a decision that I put much thought into because I say it was never a decision I intended to make. It was made for me, by the circumstances and by the fact that I just could not continue to keep [my husband] at home.

Once he started needing personal care, it was bad enough keeping the system going around [my husband]. Once [my husband] needed looking after rather than just a safe environment to survive in, then it was more, I think it's more than one person can do, but it was certainly more than I could do.

Wonders if perhaps she had more information than she wanted from the Alzheimer's Society.

Wonders if perhaps she had more information than she wanted from the Alzheimer's Society.

HIDE TEXT
PRINT TRANSCRIPT
And the Alzheimer's Society were helpful, in some ways they were too helpful, they sent me stacks of information which scared me stiff. I didn't realise at the time, just at the time I found it very upsetting but with hindsight I think. I don't know what else they can do but I think it would be better to filter some of the stuff that comes through.

And certainly the first time I contacted them the person whom came to see me says that she was not at all surprised but, so I rang them up and I always had the feeling that people thought it was me. That here was somebody who had delusions about their husband, rather than somebody whose husband was ill, because it was so uncommon.

Regrets having had no choice but to let her husband go away for three months to a residential home.

Regrets having had no choice but to let her husband go away for three months to a residential home.

View topic summary
SHOW TEXT VERSION
EMBED CODE
PRINT TRANSCRIPT
When [my husband] went in there, he didn't go in, when he went in permanently it wasn't going to be permanent. He was going to go in for three months and give myself and the children some, a decent break because a week isn't long enough. A week is, you're only just beginning to feel normal again and then they come back and there's always some upheaval when they come back so it's not. Three, the idea was that he would go for three months and they, the terms that they took him on were that they would take him for three months but that for the first month he must have no contact with his family.

And I think that was a serious, serious, I should never have agreed to it but I didn't have any alternative, there was nowhere else that would take [my husband] and I could not continue to look after him at home. But they wouldn't let his mother see him, or his sisters and he, we couldn't phone up and talk to him and that was very difficult. I don't think it's much easier nowadays but at the time there was nowhere that would take early on-set dementia and the nursing home rules were such that homes for the elderly had to get their permissions extended to take people under 65, which was a lot of work for them. So even homes that would be prepared to consider it, there were a lot of administrative hurdles to jump over before they could take somebody under 65. So it was and continues to be a very, very difficult problem.

He destroyed his radio tagging device and had an accident.

He destroyed his radio tagging device and had an accident.

I managed to get him moved from there to a nursing home which was much closer to home and a much bigger place. So, although it was a nursing home for the elderly, they had to change the rules so that they could take [my husband]. But the nursing home had to get special permission.

He was much happier there for two or three months because it was a nice place for us all to visit. It was out in the country.  We put a radio-tagger on [my husband] like they use for tagging animals and use for wildlife research so that when he got lost they had a chance of finding him. And he was there, that was a much better time, he was there for about two or three months one spring.

There was one time when [my husband] managed to get lost and managed to destroy his radio transmitter and he was knocked over by a lorry. He broke his arm, it could have been a lot worse, because he got on to one of the dual carriage ways and he was walking along in the dark.

And he, he changed, he seemed to get much more aggressive after that, I presume he was very frightened. It must have been dreadful for [husband's name], he had so much courage just to keep going, keep plodding on.

Her husbands eccentric approach to washing was upsetting for all the family.

Her husbands eccentric approach to washing was upsetting for all the family.

He would quite often be wandering around with nothing on. He got to the stage where he didn't really register, although he was never incontinent at home, he was quite happy to go and stand out of the door and urinate outside. He couldn't see why he shouldn't.

He used to shave, he was very much into hygiene and keeping clean, he used to have a bath three or four times a day. He had a fairly fixed routine. He used to get up about half past five, cycle down to the swimming pool, swim, cycle back, have a bath; have breakfast and go for a walk, come home have a bath. Maybe mow the lawn and gradually, although he continued to mow the lawn until quite late, he, he mowed everything in the garden. He would lift the mower up and put it down on top of bushes. And then he'd go and have a bath.

And it got to the stage that I kept the hot water running all the time because you couldn't persuade [my husband], if [my husband] wanted to have a bath five times a day then you couldn't persuade him that he'd just had one and he didn't need one. And if the water wasn't hot then he would run a cold one and say 'I can't get in that it's cold, what's wrong with the hot water?'

So, although all of it sounds quite funny, at the time it was soul destroying, watching [my husband] go down hill, trying to keep the family together, trying to keep the children on, learning to read, learning to write, in tune with the world, having some friends. [My husband] used to shave and he shaved the back of his neck because he had a very hairy neck and gradually the amount that he shaved crept up so that at the end he just had a little bit of hair on the top of his head and he'd shaved all the rest.  And people used to think that was very eccentric, the children got teased at school because of [my husband]'s hair.