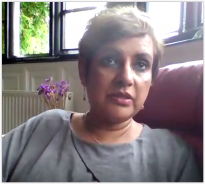 Nadra and her brother have helped their mother and father to manage care. When Nadra’s father had a heart attack the hospital discharge team arranged for some re-ablement care for him at home for ten weeks. Since then he has self-funded his care.

Nadra is Executive Chairman of the National Care Association, an organisation that supports independent care providers. She has been involved in the social care sector for 40 years and has personal experience of helping her parents with their care needs. Interviewed online due to 2020 Covid 19 restrictions.

Nadra first realised that her mother was going to need extra help when she began to have hallucinations, a common feature of Lewy body dementia. The family hurriedly converted a downstairs room into a bedroom and bathroom so that her mother could be safe as she struggled with mobility and could no longer operate the stair lift. The local council adult social care team advised on how best to prepare the room to make it safe and the conversion was paid for from savings. When her mother’s needs could no longer be met at home, her father agreed that she should move to residential care. This was a difficult time for Nadra’s father as he was upset about his wife moving into care and also worried about how to pay for it. Nadra’s mother was also living with a heart condition, her multiple health and nursing needs meant that she qualified for continuing healthcare so the nursing home fees were met by the NHS.

Within a year of her mother moving to residential care, Nadra’s father had a heart attack. He was in hospital for some time and when he was discharged, Nadra and her brother arranged for him to have a two week stay at the home where his wife was living. Her father wanted to be looked after but did not have any real care needs so she felt a trial period in a care home was the best way to find out what he wanted. Within a week, he left the care home and returned home to live independently for a further year. Unfortunately, Nadra’s father experienced a second heart attack and was taken to hospital. This time the hospital discharge team insisted that he would need care at home and they arranged a six-week re-ablement package of care through the local council adult social care department. This was extended by a further four weeks as it was clear that he was making improvements and would be able to stay in his own home with further support. He was able to use the downstairs room that had been built for Nadra’s mother. After the re-ablement period, Nadra’s father lived independently with family support and now pays for a carer to visit in a morning to help with medication and see that he has breakfast. He continues to be supported by Nadra’s brother for all his other needs.

Nadra’s father did not want to have a financial assessment with the local council because he was not comfortable having people go through his money and banking arrangements. However, he did, with Nadra’s help, apply for Attendance Allowance. This is not means tested but is awarded on the basis of care needs and he now receives the higher rate of Attendance Allowance to pay towards his daily care costs.

Nadra explains the process of getting interim re-ablement care (also known as rehabilitation).

Nadra explains the process of getting interim re-ablement care (also known as rehabilitation).

What happens is if you’re discharged out of hospital and you’re going to be living independently in your own home, then the hospital, they set into operation a re-enablement programme whereby your needs are assessed and then that, those needs are met for that six week period, and the purpose of that is to grade it down as it goes, as more independent you become the less care you receive; and it works really well and, in many cases, because people get back to living in their own home, they’ll have a carer coming in in the morning, one in the evening, one in the afternoon, whatever it might be; I think it was four times a day, which was far too much. He was really unhappy about it didn’t want it, so we kept reducing it and they wouldn’t sign him off until, so they, they were confident, and after the six, they actually extended that period, because they thought he was so unstable, for another, I think they extended it for another month, I can’t remember now and the, and the budget holder has that, you know, they can do that, social workers have that option if they think they can eventually make that person independent and in dad’s case it did work.

Nadra’s dad is loving the help he can pay for with Attendance Allowance.

Nadra’s dad is loving the help he can pay for with Attendance Allowance.

Dad’s, anyway he was, he was awarded Attendance Allowance at the higher rate and so he then which included having, you know monitors and everything in the house; so we’ve got all that in; and he’s paying for care, he’s paying for somebody to come in every morning to make sure he has his medication and his breakfast and he’s loving it.

Nadra says that the social workers are trained to recognise people’s care needs.

Nadra says that the social workers are trained to recognise people’s care needs.

Yes, they came, they came and did a needs assessment on him as to what he could and couldn’t do, and he sat there telling them he could everything which was really interesting, because the assessor just looked at him coming across the room and realised he couldn’t do anything [laughs] bless him. And he gets very angry, he gets very, very angry if somebody doubts his word; so she could see that the frustration was there. So, you know, they’re trained to do that, they know if you’re if you’re just, you know trying it on or, you know, what’s for sure; and actually we thought he’d get a lower rate of attendance allowance and she just said, “No, he’s, he needs the higher rate.”

The best support for applying for CHC funding comes from care home managers, according to Nadra.

The best support for applying for CHC funding comes from care home managers, according to Nadra.

Finally found a place and dad was very concerned, “How much is this going to cost? How much is this going to cost?” And I said, “Dad, we’ll work that out, we will work it out with you as to what it will cost.” But of course as it happened when we actually did all the assessments and everything it was a fully funded placement because my mum also had a she had a hypertrophic, hypertrophic cardiomyopathy, which is a heart condition. So she qualified for the funding from the NHS. Now the challenge here is that many people will struggle with that because they actually won’t be able to understand the form filling and all of that; so I think it is a huge challenge. I knew the system so it was very different in that I was able to work with the home; and the best thing is the managers of the services in care homes, if that is where you’re going to go down the route, they are the ones that should be able to support you through the process of how the funding can work, because they should have the knowledge and the experience to be looking at the different funds that are available. In some cases you do find providers are not really inclined to support but that is where the best support is.

Nadra talks about balancing paid care and the unpaid care her brother provides for her dad.

Nadra talks about balancing paid care and the unpaid care her brother provides for her dad.

So my brother walks to dad’s now; my brother’s retired but he walks to my dad’s on a daily basis around this sort of time to make sure he has lunch. So he’s had his breakfast in the morning, which is we pay for the care and then my brother comes in just to make sure he has enough for his lunch, and then we leave him in the evening for a and we will do as long as we’re able to. But, you know, I have started to talk to my dad, actually even yesterday, I was saying, you know, “The point where we’re not comfortable that you’re eating properly in the evenings we will have to get an evening call for you.” And he was accepting of it yesterday, he said, “Yes, but I don’t need it at the moment.” He says he eats and I think that’s you know, that’s important; there are just the two of us so my brother’s on his own as well, so I think in a way it’s OK. But my brother’s quite young, he’s not, although he’s retired if, he only reached retirement age yesterday actually but he took early retirement. But he does say that he needs, he, I think he wants to continue to work, maybe in a consultancy role of some sort, and I think that’s when we’re going to need to see how we manage dad, because at the moment there’s a comfort for me is that my brother’s there but it’s a huge responsibility for my brother because his life is centred around dad; and I think that’s what happens, he’s that sort of unpaid carer.