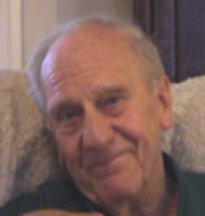 Age at diagnosis: 69
Brief Outline: Symptoms began just before moving from long term family home to smaller house. Initially cared for at home with carers coming to the house, attended day centre with weeks in residential respite. Complaints from neighbours. Now in residential care.
Background: Elderly husband caring for wife. They have 1 child. Diagnosed in 2000. Patient was a retired industrial nurse.

While he struggles to dress his wife he reflects on what her feelings might be about her total dependency.

While he struggles to dress his wife he reflects on what her feelings might be about her total dependency.

They will resist putting in their legs in something or putting their underwear on or putting their top on. Resist every item in the daily routine of getting dressed. But, I think it is sometimes they feel frustrated in the fact that they are not, I think they have moments of, they're brain beginning to work in the distant past and they've been holding jobs of responsibility and here they are being dictated to, being told to do this and told to do that, and persuaded to do this and that as opposed to giving out any of their orders, you know.

She'd try but couldn't really do it, just a like child. I think they must get frustration and just flash moments when you know everybody I think gets, when you're frustrated you can't, when you, you're trying to, you know you can do something or feel you should be able to do something and you can't, you know.

Describes the loneliness he experiences now his wife is no longer at home with him.

Describes the loneliness he experiences now his wife is no longer at home with him.

View topic summary
SHOW TEXT VERSION
EMBED CODE
PRINT TRANSCRIPT
But I'm having quite a problem sorting out my lifestyle now because the house seems very quiet and with nobody seriously to sit down and eat a meal that I've, I've cooked. I've found it very difficult to really enjoy it the way I did before.

And then, as I say I'm getting a lot of help, but I don't see the carers any more now, now that [my wife]'s in full time care they have, have more on their workload with people who really need their help and there's no aid needed for their, any further showering and etc like that. So I'm just left now with the lady coming today who is a psychiatric nurse for the area who's going to just have a general chat and see if I'm OK and then I'll be on my own. But, unless I need some help, that is.

Describes how he learnt to assess residential homes.

Describes how he learnt to assess residential homes.

There's a very good book in [town] free for anybody interested you can pick it up at I think at the libraries or different places. Giving you all the residential homes in [county] and there are a lot of them. Giving you full descriptions, quarter page adverts of the things they specialise in. Because some do specialise in Alzheimer's rather than other things, you see? Other dementias. So there's plenty of information in that. And just a question of then, of going through them, making appointments and going round to see them. And they conduct you round and it gives you a good idea. You can see the, the other residents and how the carers there are behaving towards them, you know, and things like that. But it was a question of, I, I suppose I looked at about between 6 and 8 and some were too big in my opinion and far too institutional and others were rather on the small side. And conditions were rather cramped. But, it was experience again. Over a period of 6 months I became quite an expert at going through a home and knowing what questions to ask, you know. Do they this, or do they that? And you know the right questions to ask when you know the problems.

And also how some are run. Some of them obviously weren't as strict with their hygiene as they should be. And that's, the one of the, the things on the top of the list always. That, that you never have an unpleasant odour when you're in the building. They go to great lengths to make quite sure that it's all very, wholesome in all respects. They, there's no cooking smells or anything else, you know. The carers there are all very strict that they don't let their residents to go round with clothes which ought to have been changed some hours ago and things like that, you know. Some of them are a little bit slack like that I think. But I think they're very hard pushed for staff. I think they are having difficulties getting staff so it's understandable at times that they haven't got the space in the smaller places to give the service that they really should be. So I felt that [name] of nursing home], it was in [village] by the way.

Waited a year for the Court of Protection to allow him spend his wife's money on her residential care.

Waited a year for the Court of Protection to allow him spend his wife's money on her residential care.

Actually it's, not only, not Power of Attorney only it's Court of Protection. I left it too long to get Power of Attorney and the solicitor couldn't agree that she could sign her name properly. So I had to get, the thing dealt with by the Court of Protection, which took, which took a year instead of a month. They're terribly, oh it's, they, a lot of blue, an awful lot of red tape with them.

However, I'm, I'm empowered to wind up her estate and put the money into a new account. And I can actually pay the bills for [my wife] from our own finances rather than mine which brings quite a lot of paperwork into it but it does mean that in the end with her, when her finances are down to £18000 the Council will have to put their hands in their pocket to pay the fees which are pretty exorbitant.