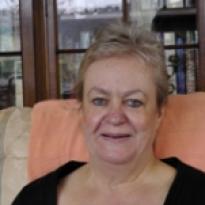 Age at interview: 63
Brief Outline: She met Charles in 1990, four years after he had been diagnosed with MS. They soon married and moved to the countryside, where they have lived happily ever since, despite progressive disability.
Background: Mully, age 63, is an accountant and charity fundraiser. She is white German, married, with no children.

Mully met Charles in 1990, four years after he had been diagnosed with MS. At the time they both had successful careers working in London and Charles was going through a divorce. Mully remembers that, although he was showing subtle signs of MS, she felt positive about their future together.

They got married very quickly and planned to move to the countryside and live life to its fullest. When searching for their new home they considered the future and chose a bungalow which was easy to adapt to their changing needs. The village they moved to is small with a close community which suits them very well; they have made many friends and everything is close-by.

Mully describes how over the first few years Charles gradually started having bouts of sickness and dizziness. He started having falls which became more frequent and Mully found it difficult to lift him. They now use inflatable technical aids to help him sit up and be lifted. On occasions Charles has been admitted to hospital; however they have noticed his condition deteriorates further here due to immobility and potential infections. Mully prefers to carry out nursing herself at home to avoid hospital stays and visits from less experienced carers. They are both assertive in challenging stereotypes of disability, poor quality care or access to services.

In 1993 Mully was hit by a car and suffered spinal damage. She has since had various operations and experiences constant problems with feeling in her feet and hands. After quitting work as an accountant in London, Mully volunteers fulltime for a charity, fundraising for local projects. She occasionally arranges respite care for her husband, but doesn’t do this very often because she misses him too much. Mully’s life is busy with working fulltime and people often visiting them both. Although Mully is Charles’s carer, she thinks of herself more as, first, his best friend and then as his wife, rather than his carer. Overall she is happy and believes they lead a very good life.

Mully says you can’t turn the clock back so just ‘do the best you can and don’t be frightened.’

Mully says you can’t turn the clock back so just ‘do the best you can and don’t be frightened.’

View topic summary
SHOW TEXT VERSION
EMBED CODE
PRINT TRANSCRIPT
Hang in. Do the very best you can and don’t be frightened of it. Any disease of any sort is going to hit everybody. We’re all going to die and it’s not going to be wonderful. The lucky ones are the ones who have the spontaneous heart attacks. The rest of us dribble. We dribble away and we just have to accept that, no magic numbers and just get on with it because it’s not going to go away. You can’t, you can’t go to bed and think tomorrow’s going to be back to, you know, move round the clock because tomorrow is just going to be one more day down the line. So you might as well be happy and enjoy it and have a laugh, be kind, be really, really kind and be generous and it doesn’t really, it doesn’t hurt at all to tell a joke while you’re cleaning a suprapubic catheter.

Mully didn’t know anything about MS when she met and married her husband, but she was optimistic that she would be able to handle it.

Mully didn’t know anything about MS when she met and married her husband, but she was optimistic that she would be able to handle it.

View topic summary
SHOW TEXT VERSION
EMBED CODE
PRINT TRANSCRIPT
I knew absolutely nothing about MS. I’m not sure if I even knew the difference between MS, motor neurone disease and muscular dystrophy. I knew nothing. I knew a little bit about Motor Neurone Disease because the landlord of the flat next to me actually got it and he and his wife were great friends of ours, so Charles and I lived with them through the very traumatic, because it was a very quick one but no, nothing. So of course, I went completely blithely into this thinking, “Right, you know, [laughs] I’ve dealt with royals and I’ve deal with heads of industry. I can deal with this. I can sort this out. There'll be a cure.” Because, of course, they always say that, “They’ll be a cure.” “Next fifteen years,” People say, “They’ll be a cure.” So you have that, from that you have to be completely very, well I was very optimistic about it. I thought this is something that I can handle. I, you know, he was a pretty wonderful man because he’s got a brain the size of a planet and to me, is very attractive. So I thought that I could handle it and, quite honestly, I was thinking about this the other day because I thought, I’m going to tell Nic because if I knew then what was going to happen, I don’t think I’d have changed anything at all. It’s, you know, just one of those things, love, yes, so, yeah. You know, we have a very good life here.

Care workers were so unsure about how to manage her husband’s suprapubic catheter that Mully decided to learn how to look after it herself.

Care workers were so unsure about how to manage her husband’s suprapubic catheter that Mully decided to learn how to look after it herself.

View topic summary
SHOW TEXT VERSION
EMBED CODE
PRINT TRANSCRIPT
Charles had just come back from the two month stay in hospital and he was still very, very ill and very helpless. He’s actually got a lot more strength in himself since then and he can sit up. Could he couldn’t even sit up unsupported when he came home and we had the nursing not the not the community nurses, but the carer, you know, the carers who come in two or three times a day to do things. And they started coming in three times a day and I could actually see some of the younger carers finding it difficult to deal with this suprapubic catheter because they hadn’t done it. It’s not something that happens to everybody, thank goodness, and so they were having problems doing it and I thought, “Well, I’ll have to get to grips with it.” Because it was becoming, we stopped the lunch time visits but then it was becoming really difficult because after you get the, what they call the A team coming in for two weeks after somebody is discharged from hospital. They are very superefficient and they come on the nose. They say they’re coming at six o’clock in the morning and they’re there at six o’clock in the morning. They say they’re coming at nine at night, they come at nine at night. They come, breeze in, you give them a coffee, they do their job and they leave. But then, when you get general carers who follow on and these are the ones you’re paying for, they become, they’re just normal people untrained with a love of people and but they’d, slap happy and I just thought, “I have to get to grips with this.” Because it just didn’t look clean enough after they’d left and I said to Charles, “Well, what do you think?” And he said, “I’m fed up because I get up at six waiting for them and they don’t get here until eleven and then I, they turn up at four to put me to bed.” He said, “I don’t want them.”

Mully and her husband had enjoyed being part of a group of people with MS who met for social experiences and to share information.

Mully and her husband had enjoyed being part of a group of people with MS who met for social experiences and to share information.

View topic summary
SHOW TEXT VERSION
EMBED CODE
PRINT TRANSCRIPT
We did then, when we moved here, we did join with a small social group of people with MS in [town name] and that actually, turned out to be great fun because they were a bunch of like minded people, like Charles and myself, varying age groups, and various different conditions of MS. So I think that only two were in wheelchairs, one used this little buggy and the others were quite sort of normal to look at until you realised that they had that MS walk, that stagger. One of the beneficial things about that MS group was that we did no fund raising and we met for purely social experiences once a month for lunch and really to share information because there are all sorts of things that happen through the hospital system and the GP system where you’re given something and you’re not given any information about it. And one of the things that we found was that because Charles and I live on the computer and we both read, we knew far more about MS than anybody else in the group. And simple things like the powder you take for bowels, constipation, they were still being given the old Fybogel stuff, which doesn’t work for people with serious, serious constant constipation, to something as simple as what is on the market is actually, now being prescribed. But I mean now we’re talking about ten years ago.

Mully thinks that social services provide a good service with a limited budget but that hospitals should give more information when you are sent home after an operation or other procedure.

Mully thinks that social services provide a good service with a limited budget but that hospitals should give more information when you are sent home after an operation or other procedure.

View topic summary
SHOW TEXT VERSION
EMBED CODE
PRINT TRANSCRIPT
Social services are absolutely wonderful with what they can do. I mean they are so, the poor things, they just tear their hair out most of the time because so many people lose, every time the government decides that they’re going to cut this budget or that, well, they tell people that they can’t have something and then, all of a sudden, the government changes its mind and gives a whole chunk of money to this person but not to that person. And I think that they do a wonderful job trying to deal with that. I think my only criticism is that there is a lack of information when there is a hospital procedure, like an operation or a procedure. The information about what happens afterwards, when you go home, especially when your husband has only been in for a few hours because they wanted out, no germs, no bugs, thank you very much, is very limited. They give you a bit of sticky plaster and a spare and some paracetomol and send you home and I think that is terrible. That is counterproductive because within two or three days, that person is back in hospital again. But you’d think that that would be a self-evident truth wouldn’t you because that’s what all the statistics say as well but it doesn’t seem to it doesn’t seem to filter through the levels does it, which is just odd.
Previous Page
Next Page