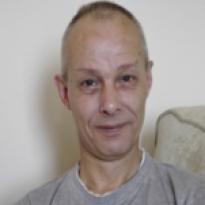 Age at interview: 51
Brief Outline: Mike’s partner was diagnosed with relapsing-remitting MS in 2009. She has frequent relapses, which more or less immobilise her. Mike cares for her full-time, with some help from paid carers, but sees himself as her partner, rather than her ‘carer’.
Background: Mike, age 51, is a hotel barman/porter, but is currently unemployed. He is white British, married, with no children.

Mike met his partner in 2008, when she was already showing some signs of MS. They spent a difficult year trying to get a diagnosis, which was confirmed after a lumbar puncture in 2009. Their living arrangements were disrupted without warning and they moved from the South of England to the Highlands of Scotland, where members of Mike’s family live, and where he spent some time in the early 2000s.

Mike speaks highly of the health and social care they receive, though he, and she, would like to have more carer input so that Mike could return to work. His partner has relapsing-remitting MS but it seems to be quite an aggressive form. She has had relapses every 11 to 12 weeks, which more or less immobilise her. Even in phases of remission she can only walk to the end of the street and has to use a motorised scooter to get any further on her own. She has a personal carer for 30 minutes each day to help her shower and dress. Another carer sits with her for a 3 hour period each week so that Mike can get some time to himself. He finds this crucial to maintain his own identity, as otherwise he is caring for his partner full-time, very willingly, but at the cost of becoming completely wrapped up in the role. He doesn’t see himself primarily as a carer, but as a partner.

Mike describes receiving the diagnosis, and living with MS, as having turned their world upside down. His partner has an adopted child from a former relationship but at the moment she is unable to see him as often as she would like and feels guilty about not being a parent to him. She is frequently in a very low mood because of the impact of MS on her life and has talked, with Mike, of ending her life. With her agreement, he now controls and dispenses all her medication. Mike and his partner married in August 2011 and Mike emphasises that he is ‘in it for the long-haul.’

Mike is active in an internet-based organisation called Shine on MS, originating in Scotland and dedicated to funding and finding a cure for MS. He is currently one of the administrators for the group.

Mike is worried that his wife might be tempted to kill herself and they have agreed that he should look after her medicines to prevent her from taking an overdose.

Mike is worried that his wife might be tempted to kill herself and they have agreed that he should look after her medicines to prevent her from taking an overdose.

View topic summary
SHOW TEXT VERSION
EMBED CODE
PRINT TRANSCRIPT
Again, if this isn’t too painful, we’ve had a conversation together off camera about people choosing to end their lives because their experience of living with MS is more than they can bear. When you think about that, how does that have an impact on you?

It’s quite frightening. Yes, Jenny has had moments recently where she’s been up and down like a yo-yo. She has had moments, we’ve actually got to the stage now where most of Jennifer’s medication is not in the house. It’s up at my mother’s house and I tend to, I go up there once a week and make up her medication for all the week and basically I’m administering Jenny’s medication for her. I make it all up and I administer it on a daily, on a daily basis because you know knowing the way that Jenny has been feeling just, just recently it’s quite frightening. And, you know, I can’t fully understand it but I can understand where she’s coming from, you know, what she’s actually been through especially more recently you know with one relapse after another after another it, you know, I can understand that, you know, obviously she’s had some very, very down moments when she’s thought you know, “I don’t want this anymore”. It’s quite frightening.

Mike talks about his partner getting a diagnosis about two years after her first symptoms. They both found it hard living with the uncertainty.

Mike talks about his partner getting a diagnosis about two years after her first symptoms. They both found it hard living with the uncertainty.

View topic summary
SHOW TEXT VERSION
EMBED CODE
PRINT TRANSCRIPT
It was very, very frustrating. From visiting [hospital name] several times every time we visited [hospital name] we came away from there with having been told, “There is a possibility that you do have MS but we can’t fully confirm it” and there was a very big, over that over that two year period, there was a very, very big question mark and it impacted a lot on Jennifer and I think it possibly made her a bit worse. As I say, it made her a bit worse it, her moods were up and down her moods were all over the place. Jenny was very, very frustrated and it, it impacted on me as well. Yeah, it was very, very hard for both of us.

What sort of impact did it have on you?

Well, obviously, because I love Jenny dearly it, it did impact, it did impact on me. As I say me not being able to work I kind of, that was frustrating for me because Jenny knew that I was better off, that I’d worked all my life. Jenny knew, or Jenny felt that she was holding me back whereas from my point of view yes, okay it was holding me back but my main concern was actually Jennifer at the time. So, yeah, it was very, very hard, very hard. And still is. But that particular two years was very difficult. As I say, it, it took us actually moving up to [place name] to actually get the diagnosis, even though it hasn’t actually changed much but it’s nice to actually know what the problem, what the problem is and actually being able to deal with it better from that.

Social networking has enabled Mike and Jennifer to talk to other people with MS. Mike is involved with a network in Scotland called “Shine on Scotland.”

Social networking has enabled Mike and Jennifer to talk to other people with MS. Mike is involved with a network in Scotland called “Shine on Scotland.”

View topic summary
SHOW TEXT VERSION
EMBED CODE
PRINT TRANSCRIPT
Most of our information has come through MS Society our local, our local MS branch, our MS nurse has been very, very helpful and we’re quite lucky that the GP that we are actually signed up to in [place name] Surgery knows quite a bit about MS herself so she can relate to the way Jennifer is. And basically talking to other people who we have got to know via using social networking and stuff like that. We’ve basically gleaned most of our information from there but primarily from the MS Society and from our MS Nurse and the local MS branch they’ve been very helpful and very supportive.

Once Jennifer first got the diagnosis we were both on, on the net and we all know what the world wide web can do, it can give you information overload and there have been all sorts of places that have provided us with information. From my point of view I searched several sites and there is so much information available that it can become quite overwhelming so I tended to concentrate mainly on the MS Society. Also we have got involved with a network called “Shine on Scotland”. We’ve got to know a lad called Ryan McLoughlin who has been campaigning for the Vitamin D council, we’ve got to know the family as well because his, his mother suffers similar disease to Jennifer. We’ve got to know them as a family, we’ve met them in person and basically what they have actually done is to set up their own social site which is very similar to Facebook which is called “Shine on MS.” We’ve got involved, we’ve got signed up to that as well and we’re beginning to sort of meet like minded people over the net, like minded people and learning about their experiences as well.

Mike acknowledges that for some couples life with MS becomes too much for their relationship to survive. But he emphasises that he is, ‘in it for the long haul.’

Mike acknowledges that for some couples life with MS becomes too much for their relationship to survive. But he emphasises that he is, ‘in it for the long haul.’

View topic summary
SHOW TEXT VERSION
EMBED CODE
PRINT TRANSCRIPT
Being together makes me very happy and focusing on doing what we can do when Jennifer is well enough. Doing things together, the fact that we’ve just got married, we had a wonderful honeymoon you know . As Jenny knows I’m, you know, I’m here for the long haul; I’m not going to go anywhere. And we will, as I say, I tell, I base my happiness on the fact that I’m actually with Jennifer and I will be with Jennifer for the duration . That makes me happy. I, obviously, it’s very hard when Jennifer’s laid up in bed and there’s little or nothing that I can actually do to help. But I console myself with the fact that I’m actually here and I will help in any way that I can. I think I know Jennifer will probably tell you that, you know, me actually being here is a comfort for her.

I was just thinking about what you said about being in this relationship for the duration. I’ve spoken to quite a lot of partners and they’ve more or less all said a similar thing to me. Many of them have also talked about knowing other people whose relationships have dissolved as a result of MS.

And I wondered if you could just talk a bit about where that motivation is coming from for you to stay in it for the duration?

Well the motivation for actually staying, staying in it for the duration is the fact that I love Jenny to bits and to me the fact that she has an illness doesn’t make a jot of difference at all. I mean, yeah, okay, I can understand where some people would be in a relationship and find that they couldn’t actually cope with it. As far as I’m concerned, what drives me is the fact that I love, I love Jenny with all my heart and you know if this is the way it is then this is the way it is. We deal with it as best as we can.
Previous Page
Next Page