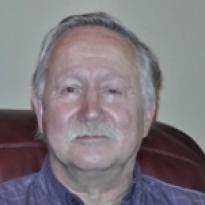 Age at interview: 63
Brief Outline: John’s wife has had MS for over 30 years. The diagnosis was a relief because they both feared something worse. John describes his wife as a ‘feisty’ lady who refuses to see herself as disabled.
Background: John, age 63, is a retired schoolmaster. He is white British, married with three children.

John’s wife was diagnosed with relapsing remitting MS more than 30 years ago, after several years of troubling symptoms (walking and visual problems) which were attributed, both by people around her and by her GP, to other causes. In retrospect she felt that there had been even earlier signs, when her leg went numb as a teenager. This was attributed at the time to a psychological/emotional cause (fear of exams).

The diagnosis was a relief because they had feared that the symptoms were caused by something more life-threatening, like a brain tumour. Nevertheless, their lives became strained, with three young children and both in full-time work. John’s wife continued to try and fulfil all of her mothering and household tasks despite her illness and in the face of John’s perception that she didn’t need to try and do quite as much as she did. Ultimately, as her illness advanced (it’s now at the secondary progressive stage) John’s wife had to give up work.

Initial treatment with steroids caused intolerable side effects. She took part in a clinical trial of AZT but has not taken any other medication for MS.

John, too, had to give up work on health grounds in 1999 (he was eventually diagnosed with bipolar disorder); he and his wife are now, in terms of benefit and service entitlements, carers to each other, though John sees himself as a husband rather than a ‘carer’. However, this status enables John’s wife to attend a local carer’s group as well as an MS support group. They are both eligible for respite care at a local hostel, and both receive support from specialist nurses. John’s wife also currently attends the local hospice day centre once a week. John does not really enjoy group activities and, in his observations of the different groups his wife attends, he thinks that members of the MS group tend to concentrate on the negative aspects of their experience.

John describes his wife as a ‘feisty lady’ who refuses to see herself as disabled. She regards the physical limitations imposed by MS as problems to be overcome. She will only, for example, use a wheelchair as a very last resort. She has other health problems too, including thyroid problems, arthritis and diverticulitis. John thinks that MS is also, now, affecting her memory.

John’s 84 year old mother-in-law ‘did what she could’ to help, but resisted a social worker’s suggestion that she could do more housework.

John’s 84 year old mother-in-law ‘did what she could’ to help, but resisted a social worker’s suggestion that she could do more housework.

View topic summary
SHOW TEXT VERSION
EMBED CODE
PRINT TRANSCRIPT
I was working full time teaching which sort of meant also in the evenings as well. I had my Mother-in-law lived nearby and she came down. She had my wife at sort of quite an old, an older age, so she was well into her eighties at the time. We had a social worker come round to assess us, to see if there was anything they could do to help, and that was one of those amusing and interesting moments, when she started saying things like, she thought that everybody else could perhaps do a bit more. And why couldn’t Mother-in-law come and spend the entire day there at home when I’m not there, sort of doing the housework and cleaning up. My Mother-in-law, a lovely lady, Irish, with a temper that went with it, told the lady, told the social worker exactly what she could do with suggesting an 84 year old work full time, doing the housework. My Mother-in-law at the time was in sheltered housing, very nearby to where we were living and obviously came down and did what she could.

John is sympathetic to the idea that a person’s life might become a burden to them, but his religious background makes him wonder if it can be right to take your own life.

John is sympathetic to the idea that a person’s life might become a burden to them, but his religious background makes him wonder if it can be right to take your own life.

View topic summary
SHOW TEXT VERSION
EMBED CODE
PRINT TRANSCRIPT
We sat and watched a television programme the other night with Terry Pratchett and where one of the people he was talking, interviewing went over to Switzerland to Dignitas, a 42 year old suffering from MS. And my wife’s attitude was, far too young. I don’t, well I certainly aren’t in a position where that would be a possibility because there’s nothing that much wrong with me that can’t be controlled with tablets. If my wife’s situation gets worse and worse I would be very surprised indeed if she went down that line. She would be more likely to go into a local hospice for, if it was because of the pain or whatever and you know, that route.

I think, we’re both baptised Catholics. Obviously this is a dreadful sin is to take your own life. Now I don’t think we think along those lines particularly. I think in terms of when is it right to do this? And it may be right… it may stop the particular person feeling pain at that moment. My wife has said the same, she said, “When, if you do that with the aid of Dignitas and you suddenly find yourself outside the Pearly Gates and St Peter’s standing there, and he says, “Oh, you’ve had that mate, you’ll have to go back down and do it all again. Only worse this time.” If you do sort of think there’s an afterlife, perhaps it isn’t really the right thing to do. There are better ways of dealing with it.

John’s wife had problems with vision and walking for a long time before eventually being diagnosed with MS. Living with uncertainty was difficult and they both worried that she might have a brain tumour.

John’s wife had problems with vision and walking for a long time before eventually being diagnosed with MS. Living with uncertainty was difficult and they both worried that she might have a brain tumour.

View topic summary
SHOW TEXT VERSION
EMBED CODE
PRINT TRANSCRIPT
My wife started getting symptoms approximately 40 years ago, I would say. Went to the doctors and was eventually diagnosed with having all sorts of things like trapped nerves, and... ear problems and everything else, but... This continued on till around thirty years ago. It began to affect greatly, she was going to work with one eye closed and limping along, and of course she had very little feeling in one leg. She had double vision and the doctor was still saying things like, “Oh, it’s nothing important. You know, have some antibiotics.” And eventually it got so bad that she was even accused of turning up to work drunk, because of the way she was walking in, and in the end, she sort of insisted with the doctor that this was not good enough, obviously, and the consultant came round on Christmas Eve, and said, “Oh yes, you have got MS.”

I think the biggest problem was she, with the double vision and with unable to walk properly, with limping around and with her arm, not able to do things, it was more infuriating for her, because she didn’t know what it was. And not knowing what it was, of course, it could have been a brain tumour, it could have been a cancerous growth. It could have been anything of this nature. She knew, as you do, when it’s your own body, she knew for a fact it was not an ear infection or a trapped nerve, which is what she was being fobbed off with. So in real terms it was quite difficult to live with. Not knowing what was the problem meant that she didn’t feel able to cope with a lot of with a lot of life. But she was determined she would.

John’s wife has a range of aids to mobility, all provided by the Social Services Department of the Local Authority.

John’s wife has a range of aids to mobility, all provided by the Social Services Department of the Local Authority.

View topic summary
SHOW TEXT VERSION
EMBED CODE
PRINT TRANSCRIPT
And in terms of support for physical activity what adaptations or equipment have you required between you over the years?

Well we’ve got Social Services provided us, provided my wife with a attachment for the bath to go up, to raise her up and down so that she can get in and out of it. There are additional rails all around the house and in the garden to help her walk in and out. She is provided with a walking stick. She is provided with one of those wheelers, whatever they’re called. Rollavators or something they’re called. And with a wheelchair which she doesn’t want to use. That was all provided by Social Services.

John’s wife sometimes forgets things. She makes sure to write down what she needs to remember, as one way of fighting the disease.

John’s wife sometimes forgets things. She makes sure to write down what she needs to remember, as one way of fighting the disease.

View topic summary
SHOW TEXT VERSION
EMBED CODE
PRINT TRANSCRIPT
But I think you can, particularly as the stages get more and more intense, if you’re not fighting them and I think you can give up very easily. And my wife fights them.

Especially she’s now found that she’s getting- memory problems. Says he, trying to remember the words. She finds it difficult always to remember exactly what’s been organised and what hasn’t been organised and we keep diaries of everything written down in ink very carefully and important things are written on notepaper and stuck on the fridge.

For instance, she has an injection twice a week, which I suppose, I said she didn’t have anything for her MS. She has to have a B12 injection twice a week, because that seems to keep her moving more fluently. And, and we went along. I took her along to the injection, I think it was Monday morning for 9.30 and apparently she’d made an appointment for 8.30. Well she wouldn’t normally have considered an 8.30 appointment because it takes a good hour to get up and get ready and get dressed and get herself together enough to go out through the door. And certainly wouldn’t have considered an 8.30 appointment if she’d been thinking straight, but she obviously hadn’t, because she’d written 9.30 in her diary. And I’m sure that the computer was right of course at the [laughs] at the GP’s.