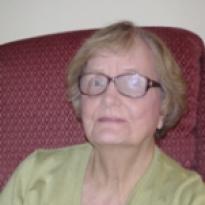 Age at interview: 71
Brief Outline: Jean’s son was diagnosed with MS in the late 1980s. Jean and the rest of the family were shocked at the diagnosis, though her son was relieved it wasn’t a brain tumour. His own positive attitude to life with the illness has helped Jean come to terms with it herself.
Background: Jean, age 71, is a retired district nurse. She is white British, divorced, with four adult children.

Jean’s son was diagnosed with MS after noticing sudden changes in his vision while playing golf. He went immediately to the A & E department of the local hospital where, coincidentally, he was seen by his own GP who was working a session at the hospital. A series of investigations followed and a consultation with a hospital registrar who said, it was ‘something like MS,’ but didn’t confirm the diagnosis. All this happened about one month before Jean’s son was due to be married, in 1986. The wedding went ahead as planned, though subsequently the marriage ended.

Jean described the diagnosis, later confirmed by a consultant, as a shock and a blow to the whole family. In her work as a district nurse she was used to looking after people in advanced stages of MS and, unsurprisingly, this affected her expectations about the progress of the illness in her son. Her professional knowledge did not help her to understand the specifics of her son’s illness and she felt that the health professionals did not give them any information or support. In fact, the consultant, with whom they arranged a private consultation to discuss the diagnosis, actively discouraged them from joining support groups because he thought they would not be helped by getting to know people in more advanced stages of the disease. His advice to them, as Jean recalls it, was simply to ‘go away, and live.’ Twenty-five years later, Jean’s son is a mainstay of the local MS Society branch.

Jean describes her son as a positive person, for whom ‘the glass is always half-or three quarters-full.’ He lives close by, like the rest of the family, and they meet every Saturday for coffee. The closeness of the family has been, and is, important to Jean. She describes her son as a much loved member of her family, as a son, father, uncle, brother and cousin. She does not like to dwell on the genetic component of MS (her former husband has been diagnosed in recent years at the age of 67) or on the long-term future for her son beyond her own death.

Jean’s son felt relieved that he didn’t have a brain tumour. But it was a blow to Jean and the family who were ‘groping around in the dark’ with no one to talk to, while Jean was trying to protect them and ‘soften things’ for her son.

Jean’s son felt relieved that he didn’t have a brain tumour. But it was a blow to Jean and the family who were ‘groping around in the dark’ with no one to talk to, while Jean was trying to protect them and ‘soften things’ for her son.

View topic summary
SHOW TEXT VERSION
EMBED CODE
PRINT TRANSCRIPT
After all the tests were done, completed, we were seen finally by a registrar at [place name], who told me, and my son and his wife, because he was going to get married in a month’s time, exactly a month’s time, told us that he had something, rather like MS. There was no confirmation.

At that point that was it. That’s what we were told. We were, although I’d got that inkling of what was wrong, you still feel very shocked and it was such a blow. My son was relieved. That was his first reaction to it. He thought he had the brain tumour and so he thought he was given a space and he thought, well, the news wasn’t so bad.

But even so we were still groping around in the dark. There was no one else to talk to. I think if we’d been able to just sit and compose ourselves after that. Talk to someone with some knowledge who could have set our minds at rest, or may be, even if we’d had a telephone number to may be contact somebody to say look help. Just having a bad moment at the moment can you please help. But there was nothing. It was a case of go away. Forget about it and live your lives

Well unfortunately we couldn’t do and working on the District my, I came in contact with lots of patients with MS, and unfortunately we saw quite severe cases. So it all preyed on my mind. So I felt very little support for my, well to enable me to give my son, because I was trying to protect other members of the family and myself and really to try and soften things for him.

Jean’s son has had MS for 25 years and lives independently. Although the family have their, ‘moments when we argue,’ she thinks of them as close to each other.

Jean’s son has had MS for 25 years and lives independently. Although the family have their, ‘moments when we argue,’ she thinks of them as close to each other.

View topic summary
SHOW TEXT VERSION
EMBED CODE
PRINT TRANSCRIPT
Could you just talk a little bit more about the importance of family? You’ve mentioned that a number of times. Just reflect on that a bit more?

Well, family have been there right from the start and all grown with it. He, my son’s had the illness 25 years now and so, and my daughter was a teenager. Two were teenagers and two were married. I’ve got four children altogether and they have they’ve all been in…We’re very close because we all live here in the same town so they’ve had a bearing on how we’ve dealt with my son’s illness.

I don’t know whether I’m mistaken or not, but I feel in a way one member of my family has probably felt on the outside looking in, maybe he... felt a little bit neglected may be. I don’t know. He was already married at the time of my son’s diagnosis and he hasn’t played an active, he’s there and he would be there to listen and support, but he’s not had a very active role. And I just wonder if that’s because he’s felt a little bit neglected because we’ve focussed on one member of our family who was ill and who needed attention and has needed more attention from time to time. But that, maybe I’m reading the wrong signs. I don’t know, but I’ve felt that at times.

But no, we’re close. We see each other regularly. We meet for a coffee anyway, every Saturday, all of us. In fact Marks and Spencers are moving to Leeds Road and I’m wondering if it’s because of us [laughs]. But no, we meet regularly for coffee so… We’re a close family. That’s apart from other things, and we go out for meals. We were out for a meal last night. So I feel we’re there for, for my son and six grandchildren are all happily involved with the family and are aware of [name] problems too.

So yes, I mean, when [name] was first diagnosed, grandparents were still around. Didn’t know what MS was, and very shocked, very frightened and felt inadequate. I remember my Father was very sorry. But just very sad because they didn’t know more about it and although they were there for us all, they felt their lack of knowledge. And you sort of tried to protect them in a way and not tell them too much or what could be down the line, although no one was to know. We didn’t know how the illness would progress. So there was no point in frightening them or talking too much about it, but they too played their part in supporting me and the other children really. So, yes, I feel we’re a close family.

We have our moments when we argue and because he’s so stubborn [laughs] we could strangle him at times, but I think his stubbornness has made him independent and kept him independent. Yes, he’s a great member of our family.
Previous Page
Next Page