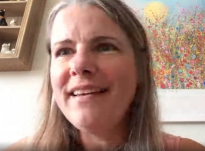 After her father died, Sue’s mum deteriorated in her dementia. She had a spell in hospital after a fall then received some interim care at home provided by the NHS. Sue’s mum now lives in a purpose-built annexe at Sue’s house and pays for her own care.

Sue, aged 55, is a manager at a government department. She is married with four adult children. Sue lives with a recently diagnosed condition that causes pain and fatigue which adds to the challenge of caring for her mother who has dementia. Interviewed online due to 2020 Covid 19 restrictions.

Sue’s mum has a combination of different care workers that they pay for. They have an early morning visit from care agency workers. This gives Sue the reassurance that someone will be there to take care of her mum even if Sue is working away that day. The local council employ the care agency and manage the care package which is then paid for by Sue’s mum. To begin with, Sue found the care workers a little unreliable but the County council sorted this out. Sue says the local council Adult Social Care department are helpful and supportive and one social worker, in particular, was a ‘Godsend’.

Sue also pays for a local care worker to provide personal care and companionship for her mum during the day and sometimes in the evenings. This care worker is self-employed. Sue thought about employing a care worker direct, but thinking about payroll and contracts was too much to take on. At other times Sue, and members of the family, provide the personal care that her mum needs. Sue believes that companionship is very important to a person living with dementia.

After Sues father died, her mum continued to live at home. Sue arranged for a care worker to help her mum with personal and household tasks. She was very resistant to begin with but the cleaner knew what to do, she just sat and chatted and had a cup of tea and soon Sue’s mum accepted her help.

Sue’s mum went into hospital after a fall. When she was discharged from hospital Sue suggested it was time her mum came to live with her so they could be on hand to look after her. Sue converted their garage into a self-contained annexe. This took about six months to complete and was paid for from her mum’s savings. The annexe is registered for council tax but Sue’s mum is exempt from paying because of her disabilities.

Sue asked the local council about help with paying for care but she was told that because her mum owned a house that she no longer lived in, she would not be eligible for funding. They rented out the house for a while which helped towards the cost of care. Income from renting was unreliable and as her mum’s savings dwindled they decided to sell the house.

Sue thinks that it is important that carers look after themselves and get help when they need it. She doesn’t mind if all her mum’s money is spent on care, it’s about doing the best you can for your loved one.

She came down to us then in I think it probably, it was early 2017, it might have been March, it may even have been before that, might, might even have been sort of like February time because she came down came with us. the annexe wasn’t done then so she lived with us, she lived in our house up until, it was about six months; so that was, I think it was sort of like October time that she actually got in there.

So what did you actually have done to create the annexe then?

Sue thinks it is important for family carers to understand they don’t have to do it all themselves.

Sue thinks it is important for family carers to understand they don’t have to do it all themselves.

You know, certainly the amount has increased and I don’t think you can underestimate, well carers, carers often underestimate the impact of the care that they’re giving and the toll that it takes on themselves and you get to a point where you, well certainly I felt like it, well it got to a point where I thought actually I’m doing all this, it’s taking its toll on me but who, why don’t I get that extra care in, you know, like for [Name of carer] to come in of an evening and spend evenings for, with my mum, etc but there’s a point you have to reach before you get to that; there’s a point where you do all these things and then, and then there’s points like, well, you know, the money’s sitting there, let’s give her that, that’s hers, you know. But that’s the rub, isn’t it, not everyone will be in that position, not everyone will feel like that and, like I said, my motivation for doing that might be tinged with some experiences with brother and sister, maybe, maybe not, who knows, but it was a battle getting to that point with yourself, you know, because you think you need to do it all yourself and actually you don’t. But I think that, that’s the thing; if you, that’s, that’s the battle with care; it’s not necessarily always about money it’s about I have to provide that care.

Sue needs the stability of agency care for the morning but pays self-employed care workers at other times.

Sue needs the stability of agency care for the morning but pays self-employed care workers at other times.

So I made the decision, no, I’m going to get more care to give me some breaks; so that’s where the evenings came in really so I can pay for, I can pay for evenings and I can pay, you know, if I need a break, if we want, if we want to go away for a weekend [Name of carer] will, I can pay….I mean, bless her, she’s £10 an hour compared to the [sighs] care in the mornings which is £22 I think, £22 something an hour.

Because you’re paying an agency fee as well there aren’t you?

You, yeah, but I need that. Because of work I can’t, and I, if I’m gone in the mornings, I could be in [City] you know, by eight o’clock sometimes so it, I can’t get back quick enough for her, so I, and I need the stability of somebody turning up every single day in the morning. If [Name of carer]’s got an issue I can sort something, by lunchtime I can sort something else out but I can’t in the mornings so that’s why we need that. And, yeah, it’s a compromise because I would rather have a single person or two doing it but I have to go this is the best route for the mornings.

The local council refunded the fees when Sue found the care workers were not working the full hour.

The local council refunded the fees when Sue found the care workers were not working the full hour.

Sue describes a young social worker as a Godsend.

Sue describes a young social worker as a Godsend.

The, prior to her going into hospital and us trying to get her care prior to that the absolute Godsend was the young social worker, he was a young lad and I thought, when I say again books and covers [laughs] I just thought oh my God, you know, she’s just going to run you out of the house, mate, you haven’t got a chance but he absolutely charmed her and was a real dream. He came with the carer as well the first time round, introduced them and he talked to the care providers and said, “You know, for the first couple of weeks don’t do anything, just go in and, you know, chat, have a cup of tea, get her used to that.” And he was, he was really good, he was really good. If it hadn’t been for him I, it would have been a lot harder for her to accept the care, but I was able to say, “Ooh, you know, you, you told, you told,” I can’t even remember his name now and I should do because he was, he was an absolute gem, “you told so-and-so that, that you’d do this didn’t you? Now have I got to ring him and tell him that you’re not going to?” “No.” [Laughter]. So yeah, so that, that’s how that happened.

Sue explains why her mother’s house was counted as capital.

Sue explains why her mother’s house was counted as capital.

Did you ever have a financial assessment from the local authority? You know, you’ve mentioned that the chap came in to do the needs assessment, but?

No well only in as much as we, when we said that we’d got a house that she wasn’t living in it was like well you’re not going to be eligible, because that counts as capital.

The council helped Sue get an earlier morning home care visit for her mum.

The council helped Sue get an earlier morning home care visit for her mum.

So, and then they kept telling me that they couldn’t offer an earlier time and that was the time, so we had to go to that time, but it was upsetting to mum on the mornings that I couldn’t go in and change her then that she was having to wait. At that point I then went back to [County] County Council and said, “I need a new provider because they can’t do this.” And they were brilliant, they were really, really good. They sent out searches to all the providers and asked them if they had slots; the earlier slots unfortunately are really they’re like gold dust so it is difficult. They then told, they then told [care provider], our care providers, they told them that they wanted them to look at this as a priority and the next slot to come up that mum, you know, should be given this but I think that was enough probably for the care provider to realise that they would lose the business. And I appreciate they’ve got lots of business but they get a good whack from mum you know and the hour as well that’s better for them than quarter of an hour here, half an hour and funnily enough the next week she was back at seven o’clock.