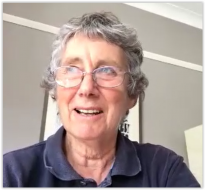 June cared for her husband at home after he had a stroke. He later went into hospital following a fall and was diagnosed with PSP. Having looked after her husband for five years, June was advised to arrange paid care workers to support her.

June, aged 72, has three adult children. She has a degree and worked as a social worker and is now retired. June’s husband, John, was diagnosed with progressive supranuclear palsy (PSP) which affected his mobility and memory. Interviewed online due to 2020 Covid 19 restrictions.

June would have liked to arrange some occasional respite care for her husband as she was exhausted being his sole carer. The local council adult social care department gave her a list of care homes but no help in finding one that could provide respite care. The care homes wanted full time paying residents. June found this frustrating because when you self-fund your care, people say you get more choice, but June felt abandoned and could not get the help she wanted.

June’s husband, John, was living with PSP, a rare neurological degenerative disease that leads to slowness of thought, dysphagia and poor mobility, sight and speech. This was diagnosed during a spell in hospital after falling. The hospital social worker advised June to arrange some paid care at home. June found a care agency that was expensive but she felt the quality of care was very good. To start with, the care workers visited two hours each week to give June a break and gradually she increased their hours as her husband’s needs increased.

John received higher rate Attendance Allowance which helped towards the cost of care. Also, June was told that they would be entitled to a reduction in council tax because of her husband’s disabilities. June had a bedroom and shower room built on the ground floor because it was no longer safe for John to go upstairs. The cost of the building extension was paid for out of John’s savings and, because the new room was purpose built to meet his disability needs, their council tax was reduced by one band.

Following a further fall two years later, John spent five weeks in hospital with a broken pelvis and then moved to a rehabilitation unit. After six weeks in rehabilitation, the family were informed that John was ‘bed blocking’ and they had to quickly find a suitable care home with nursing. June was told that, because of his healthcare needs, John would be entitled to NHS Funded Nursing Care, which is a contribution towards the nursing home fees. John was initially refused NHS continuing healthcare funding (CHC) but the social workers asked for the decision to be reviewed and, after a few months of waiting, June found out that John would get his full care fees funded through CHC.

June did not feel supported in trying to get respite care for her husband.

June did not feel supported in trying to get respite care for her husband.

I made a referral; well I tried to make a referral to Social Services because I felt that if I had some respite care it would help, because it was hard going, you know, it was really quite difficult. And so but, you know, when you make a referral, I mean they go through, you, you speak to this person to start with, the first thing they ask you is, how much money have you got? I mean that’s one of the first questions, and then it’s sort of, well, oh well I suppose we might come and see you sometime sort of thing. So eventually two social workers came out to see us to do an assessment of John and they did, they did, they did an assessment and they decided that he would need nursing care, that he had that level of need so would need nursing care, and I just wanted some respite care really, that was all I wanted. so basically they, I mean they said, you know, we, we’d have to pay the full amount, which I knew and they just gave me a list of nursing homes and said, you know, “There you go you’ll have to just try and find somewhere.” So I contacted [Residential home A], which is a new nursing home in [City] somebody came out to see us and she did an assessment, this was a nurse, did an assessment, and then she said, “Well, you know, if you ring them up and see if you can get a date.” So I rang them up a couple of weeks later and they said, “Oh we don’t do respite care.” and it was, it was the same; I went to [Residential home B] as well and looked around there and then they said, “And we don’t do respite care because, you know, if we can take long-term people we, we don’t keep beds available.” So I felt nobody was actually offering any respite care at all so I gave up at that point trying to get respite care; and that would have helped a lot really, if I could have just had a week or a fortnight every now and then it would have made a difference to me certainly.

June asked the social worker for help when her husband was being discharged from hospital.

June asked the social worker for help when her husband was being discharged from hospital.

So [laughs] so you know that you’re just a sort of bed blocker really. So we started having meetings and I said that I thought that really John couldn’t go home, you know, it was, that the point had come where it was making a proper break really from hospital and the rehab unit into a nursing home and because they were talking about two carers four times a day and he was hoisted at that point. So it would have been, it would have been difficult really, so, although, you know, with hindsight you, you have, you have your guilt about it all, but anyway that’s what I thought. And I also mentioned about continual healthcare funding at that point, whether we should whether we might be eligible for that and the social worker at [Rehab unit] sort of agreed with me and, but they agreed that he met the criteria to go forward to be assessed for continual healthcare funding.

June found a home nearby so that she and her daughter could visit everyday.

June found a home nearby so that she and her daughter could visit everyday.

Yeah, because mainly because it was close to me and close to my daughter and I thought that was as important as anything that we could see him every day. And so we had a look round; they didn’t have any vacancies at the time but you know, I said we were self-funders, and they’re quite keen to have self-funders and [laughs] and she did explain, because the rooms varied quite a lot and she said, of course when a vacancy arose he’d have to go into whatever room there was, but some of them were small and pokey without, without a bathroom and toilet and some were bigger and airier with the bathroom and toilet and there was no distinction between self-funding and council funding which she said she didn’t, she didn’t really think was right, but anyway, but if John went in and he went into a small pokey room then they would move him round when one became available in another room. So told me the costs and we knew we would get funded nursing care, which was, it’s about 150 a week, I think, something like that. So, he, a place became available about ten days/two weeks later, so he was transferred by ambulance to [Residential home] Nursing Home.

June’s daughter complained to the manager of the care home about her father’s care.

June’s daughter complained to the manager of the care home about her father’s care.

We, we did have my daughter complained to the manager actually because my other daughter who lives in [City B] she was down and we went in to see John and he was almost flat in bed and the nurse was actually feeding him porridge almost lying flat and [laughs] and [Daughter] said, [Daughter] said to her, “Don’t you think it would be better if you sat him up a bit?” Because he was clearly struggling; and she said, “Ooh I suppose so,” she said. And this was the, this was the qualified nurse...

...so, so I mean she could tell that we were quite annoyed. Anyway [Daughter], [Daughter] went down and complained to the manager that, you know, it was appalling that this woman, who was actually the qualified nurse didn’t know. So then a notice went on the wall behind his bed saying, under no circumstances must you feed John other than sitting up; but you’d think that a nurse would know that really wouldn’t you?

You said earlier that you knew that you would get some funded nursing care was that what they were referring to was sort of half-funding?

No, that was if somebody goes into a nursing home and they have sort of recognised health needs there’s a payment I think it’s about £150 a week which is a contribution towards the costs of care so, but the continual healthcare funding is something else, yeah, yeah, but it all comes out of NHS funding in the end, so yeah.

So told me the costs and we knew we would get funded nursing care, which was, it’s about £150 a week, I think, something like that. So he, a place became available about ten days/two weeks later, so he was transferred by ambulance to [Residential home] Nursing Home and I mean at that point we knew we were self-funding but the continual healthcare funding was overhanging at the time really. So I then got, was getting bills from [Residential home] and we got to, well I think there was a £6,000 bill and a £7,000 bill, and I explained to them that we were in the process of continual healthcare funding, we were, we had an interview which they’d postponed and so, you know, that was what we were waiting for, so they agreed to defer it really.