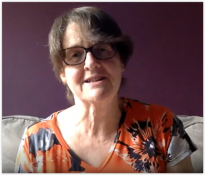 Janine’s mother was living with Lewy Body dementia and had mobility problems. At first, Janine cared for her mother and persuaded her to have a cleaner to help out. Gradually her care needs increased and they began paying carers to come in each day.

Janine, aged 63, is married with two adult children. She returned to education in 2007 to complete a degree and a masters while also being the main carer for her mother. Janine has no sisters or brothers so all the care and decisions fell to her. Interviewed online due to 2020 Covid 19 restrictions.

Janine’s mum was living with Lewy Body dementia which affected her mobility as well as her memory. She continued to live in her own home until the end of her life with support from Janine and paid care workers.

Janine had been caring for her mum more and more over the years but her mum was resistant to having paid care workers come in to her home. When her mum started getting Attendance Allowance, Janine persuaded her to have a cleaner and later she arranged paid care workers from an agency. Janine lived 25 miles away and had a young family to look after. Paying for care meant Janine knew her mum was safe and getting her meals when she couldn’t be there. Also, when Janine visited they could spend time together, going out for meals or social events rather than cleaning and doing personal care.

Janine’s mum had alterations to the upstairs bathroom which was paid for out of her savings. She went into hospital after a fall and the occupational therapists told her she would need to move her bedroom to the ground floor before she could safely return home. The local council adult social care department helped to fund this and provide some equipment.

After paying for care for around three years, Janine applied to the local council for a financial assessment because her mum’s savings were running out. When her savings dropped below the financial threshold, the local council started to pay towards the costs of the care workers.

Janine thought the care monitor that her mum had kept her from needing night time care.

Janine thought the care monitor that her mum had kept her from needing night time care.

Did you ever have to have anyone come in overnight or did she manage, or how did that go?

No never, because my mother had she was lucky in a way we had, there was, there was two, there are two things; one early on very early on she had a fall, this is before she had carers, she had a fall in the garden and she couldn’t get to the phone because she’s got bad knees and she crawled into the house and rang me [laughs] and she said, “Oh I’d better get something.” So we got in, what, you put a thing round your neck and you press it; it’s called Care Link in [name of city], different names everywhere. She said, “I’d better get something in case I fall over in the garden.” So she had this pendant round her before her dementia got really bad, so she was used to having that and she used to ring them a lot, she used to press the Care Link and sometimes, and she’d, they used to say to me, they’d chat to her, they, “Oh yes, sometimes she used to ring and say good night and chat, and whatever.” So that kept her without having carers for a long time.

Janine’s mother started to pay for care at home when Janine volunteered at the London Olympics.

Janine’s mother started to pay for care at home when Janine volunteered at the London Olympics.

The reason why I had to get carers in was because I used to go over a lot, and it was in 2012, that’s right, because I went to I was a games maker and I was down in London so I was going down to London...

For the Olympics, as a game, and I was stopping in London for two weeks, and I said to [husband], I said, so he said to me, “Well what are you going to do about your mum when you’re, when you’re down in London for two weeks? I’m not going to go and do what you do.” [Laughs]. “Oh I never thought of that.” So that’s when, that sort of was another trigger for the, you know, as well as she was struggling and she needed it. So she really had no choice.

Janine thought her mum had more choice by going direct to the care agencies rather than through the council.

Janine thought her mum had more choice by going direct to the care agencies rather than through the council.

I, so I suppose if I’d gone through, if I’d gone, you can go through the council route, so you can go through the route where they sort everything out for you, but you’ve got no control over it. So ironically, because my mum had got enough money I had more control over about what care she had, whereas if it was the other way round, if she hadn’t got her own money then you would have to, you’d have your fifteen minute calls. Because that happened to my dad’s, that happened to [husband]’s aunt; she had carers coming in for like five/ten minutes just to do things. So in a way with having to pay for your, because there’s a positive side having to pay for your own care in the sense that you get to choose, you get to say what’s happening and you’re more involved with it, whereas if you’re having to go through the council way it’s what they decide.

Janine paid for care for her mum but was still eligible for Carer’s Allowance.

Janine paid for care for her mum but was still eligible for Carer’s Allowance.

And so was that based on your, your activity, how many hours you were helping her?

Yeah, yeah, that’s right, based on how many hours I was there helping her, which it was a lot really, I didn’t realise I was going over quite a lot of times you know, and it, and it’s, and the one thing with having the carers there it meant that I knew she was safe and that she, that, you know, there was somebody making sure she was eating and stuff, so when I went over to see her I wasn’t there cleaning up messes and doing stuff, I was there taking her out, so she’d got social, you know.

When her mum’s money reduced to below the threshold, Janine opened an account to pay the care workers.

When her mum’s money reduced to below the threshold, Janine opened an account to pay the care workers.

I had her accounts, that’s it, they gave me an account. So there’s two ways of doing it; you can let the council sort it out or you can ask for money to be put into this account, and that’s right, I had to monitor, I, they had to monitor this account. So I had a separate account which was for my mum’s care, so they told me to open a bank account which was separate for my mum’s care and then they used to have to pay, they used to pay the money into that and then I used to pay the care bills from that, it’s coming back to me now, and then they had to audit it every, every so often; I had to send the bank statements and the bills and stuff to make sure I wasn’t like creaming the money off for something else.

Janine explains what she had to take to the financial assessment.

Janine explains what she had to take to the financial assessment.

No, no, they don’t look at houses at all I mean because she was in her own home; the idea is they want to keep, well at that time, I’m, I don’t know what it is now, but I would think it’s the same, they wanted to keep people in their own homes because it’s more costly for them, well it is better to have people in their own homes really. So she, yeah, she had to look at all my mum’s financial things; so I had to take bank statements, any savings she’s got; my dad left her shares, he also left her an investment portfolio thing so that was still there, so she had well over £25,000 at the time, it wore down though so they didn’t contribute anything so she had to pay. But initially the way it happens with care you start off with a little bit and you end up having a lot.

Janine didn’t find out for years that her mum could save on Council Tax.

Janine didn’t find out for years that her mum could save on Council Tax.

Well yes and I didn’t find out about this for years later because the attendance allowance once she’d got that that was supposed to go on to care, for care which is a good sort of trigger, because what a lot of old people say is, I can’t afford care, I don’t need care, I can’t afford it, and that’s what the social worker said to her, “Well that’s why you’ve got attendance allowance, to pay for your care.” And I didn’t know about the council tax, nobody told me anywhere, and it was about three or four years later [laughs] I found out. I says I was speak, it must have been the social worker and she says, “Well have you been paying council tax?” I said, “Yes.” So because you got attendance allowance it, you can just say to the council and they backdated it, to be fair to them, so they backdated it for all those years. They needed to know when she was diagnosed with the Lewy Bodies and they backdated it; so she didn’t pay any council tax at all that’s from when she was diagnosed. But nobody tells you that, and I says, “Why didn’t anybody tell me?” [Laughs].