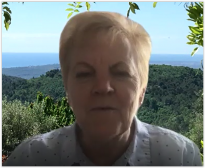 Hazel was increasingly worried about how her dad was coping. She did his shopping online and visited every week or so. When they went on holiday, Hazel’s dad would stay at home and they paid a care worker to check in on him each day.

Hazel is a retired events coordinator. She is married with one adult daughter. Hazel’s daughter lives abroad and now has children of her own. Hazel was worried because her dad lived so far away so he came to live with her when he was in his nineties. Interviewed online due to 2020 Covid 19 restrictions.

Hazel’s dad worked as a carpenter until he was 75 years old. He lived over 100 miles from Hazel and as he got older she worried about how he was coping. She visited often and managed to arrange grocery deliveries and transport if he had an appointment to go to. Eventually he agreed to move to Hazel’s home, he sold his house and lived with Hazel for two years.

When Hazel and her husband went on holiday she worried that her dad would not eat properly so she paid a care worker to visit each day to help with meals. To begin with she used a care agency but there was a mix up and the care workers did not visit her dad for a week. Hazel then found a local woman who was willing to care for her dad when needed.

Hazel’s dad had a short spell in hospital when he was in his late nineties. The hospital wanted him to move out after a few days so Hazel frantically looked for respite care while they decided what to do. It was a difficult time and she did not know where to start. Hazel feels she was not supported by adult social care or the hospital discharge team when she was looking for care options.

Hazel found a care home that was newly built and had fantastic facilities. After a few weeks Hazel realised her dad spent all day in his room and did not benefit from the modern facilities. A friend recommended another care home and Hazel went to look round. She was delighted by the warmth of the staff and the liveliness and companionship of the place. Hazel put her dad’s name on the waiting list and he moved in five weeks later. Hazel feels her dad was very well looked after to the end of his life.

Hazel’s dad paid for the care home fees from his pension income as well as the money from selling his house. The care home applied for higher level Attendance Allowance for him.

Hazel was worried about her father who lived over 100 miles away; she wanted him to move in with her.

Hazel was worried about her father who lived over 100 miles away; she wanted him to move in with her.

So it got to a point really where; and, and of course I knew he wouldn’t want to do it so I sort of postponed it and postponed it, and then I thought no, this is, this, he’s got to come and live with us, and we can, we could accommodate him so it was not a problem. So basically we had the conversation and I said, “You know we’re increasingly worried about you and if you have an accident,” and we got him one of those [tuts] you know, things round your neck thing to, to press but obviously he was leaving it all over the place anyway and he wasn’t wearing it and, etc. So I said, you know, “It’s, we’re now worried because if you fall downstairs then what’s going to happen?” And of course his attitude was, “Well I’ll just die.” And I said, “No, that’s not going to happen, you could be in pain for days on end and nobody will know.” So anyway he said, I said, “And, you know, the house is now getting in such a state that it’s actually, you’re not safe anymore and we don’t think you’re safe and we think you’re going to be safer living with us.” And he said, “OK.” And I thought oh right, OK. So he came to live with us probably nearly two years before we ended up in sort of [name of Care home]. So we sold the, we had to sell the property anyway because we weren’t prepared to do anything with it or look after it, so we sold the property, he moved in with us and everything was fine up to sort of, I suppose four or five months before he died.

Hazel’s father had been in hospital and his mobility suffered so she was worried about the stairs at home.

Hazel’s father had been in hospital and his mobility suffered so she was worried about the stairs at home.

No, no, again the only adaptation we needed would have been a Stannah stair lift and we couldn’t put that in, it was out of the question. So again we sort of, we thought as well that actually him going up, because he’s not going out anymore him climbing up and down the stairs it’s actually doing him a world of good because that is the only exercise that he’s got during the whole day, so although it’s inconvenient he can still do it, and as long as he can still do it then, you know, well he can live here. But it was after the stint in hospital that sort of changed everything that we then thought I don’t, you know, we don’t, we’re not sure he can manage the stairs anymore and him falling down the stairs would be a total disaster.

Hazel’s dad did not benefit from the modern facilities so he moved to a home that was more suitable.

Hazel’s dad did not benefit from the modern facilities so he moved to a home that was more suitable.

So off we went to [Care home X]; and although it was clean, he was well cared for, it was [sighs] shall we say like a hotel? So it was like going into sort of, I don’t know, like I don’t know, Premier Inn or something; long corridor, all the doors shut, and although it was great if you were able to get out your room and walk around because they had, they had a gym, they had a hairdressing salon, they had a cinema, they had a bar, all that, but he was not interested. So his outlook was his room, basically, and whoever came in and out of the room. So we then thought he, we, he can’t stay here, it’s OK for the moment but he can’t stay this is soul destroying; if he’d lost the will to live before he went into hospital then this is going to finish him off and it’s just not nice. So talking to people, because again we, I didn’t know what I should do for the best, but talking to people and I play golf; so the ladies at the golf club were saying, oh [Care home Y], it’s terrific, it’s, we know people that have been in there, etc, etc, and I said, “I’ve never heard of it.” So we then paid a visit and of course it was like chalk and cheese. Walking into [Care home Y] was a hive of activity, it was buzzing, the atmosphere was alive and I thought “oh my God”, because he was ex-serviceman then all these poppies everywhere, British Legion everywhere, I thought oh this would be fantastic for him because he would have something in common and it actually might bring him back to, to life, so to speak. And it was a question of you’re on a waiting list so we thought OK, we won’t move him back home to move him back out again, we’ll keep him in [Care home X], and I think he was in [Care home X] for about four or five weeks then we got a place. So then we moved him to [Care home Y], and again it, it was just so different, it was; I mean it’s just really difficult to explain because from the point of view of if you’re old and infirm it [sighs] you don’t want to be in a like, in a hotel-like situation in a care home because it’s just soul destroying and although it was brand spanking new and smart and upmarket and everything it might, it didn’t make any difference to my father; there was no, the doors were shut on the corridor and it was just like being in a hotel room. So we got him to [Care home Y]

The care workers Hazel had booked to look after her dad when she was on holiday didn’t turn up.

The care workers Hazel had booked to look after her dad when she was on holiday didn’t turn up.

Well actually before I got [name of carer] actually we did have an agency.

We did oh God, I’d forgotten about that. It I only had them for two weeks, that’s why and again the only, the because I hadn’t, I was in the process, it was before [name of carer] came and before I was able to interview her and I got the agency in for two weeks and they turned up the first week and they didn’t turn up the second week...

...and yeah, so then I got [name] and I thought OK, it’s not working with the agency anyway because; and they were, their attitude was, “Oh oh didn’t we?” and I said, and they said, “Did you book it?” And I said, “Yes, I definitely booked it and this was the time and this was the day.” “Oh he must have got, he must have slipped off our list.” And I thought that’s not good enough, he could have been dead, that is not good enough.

And was he expecting them, you know?

Well he was sort of, he ha, we, he kept a diary so I put the na, yeah, so had he looked in the diary, then he was expecting them, so, and then they didn’t turn up, then he just thought well they didn’t turn up, he didn’t really bother why or care why, to be honest, but I cared and I was really angry because I thought my goodness, you know, that could have been anybody and they could have had an accident and then these agency people wouldn’t just have sort of just not known about it really, I wouldn’t known about it until I came back so I thought “OK I’m not using them and I’ve now got [name of carer], I’m seeing [name of carer] next week, so cancel that lot” which I did.